About the book! Most everyone who ordered a book has received it by now, and the response has been completely gratifying. To all who sent kind comments, thank you. The post office does strange and not so wonderful things, so if your copy has not arrived, be patient. I followed some of the tracking numbers and found that our astute postal service sent a number of the books to Dallas even though for delivery in Austin and here in SA. Go figure.

I will include a few of your comments below, edited a bit.

From Pete Sweet: My reflections booklet arrived on Monday. I cannot begin to tell all of you what a terrific job you did with it. It has so many memories and I started at the front and have read through letter “C”, the information submitted by classmates shows what a diversified group of young people attended Jefferson High School graduating in 1954. To see everyone of our classmates is a true joy and to hear their adventures and experiences was a true gift. I do not know what those who did not order a copy of the publication thought they might be getting, but I can personally say that I got way more than I expected. I thought that I would get a pamphlet containing what those who replied about the past 60 years had written. To get as much information as this fine book contains is priceless. I hope that perhaps in the future when classmates are in San Antonio they might be able to get together to keep in touch.

From Janet Walker Mathes: I just received my 6o Years of Memories book today and I can’t put it down. It is so great and I am so very thankful to all those who helped you get this together and get it out. It is such a treasure. Please relay may heartfelt thanks to all those who took their time and energy to compile and distribute this to all of us. I wish I had known all this about my fellow classmates before we were together. What interesting lives.

From Sue Grum Redding: Received the ’54 History Book on Wednesday. I spent all afternoon reading it from cover to cover and then reread some parts yesterday.  It is awesome.  Thanks for all your work and the others that were involved.  Thinking back on my time at Jefferson, I remember more about the fun and friends instead of all the studying we must have done.  Would you have believed when we graduated that 60 years later there would be this volume of success stores?

Enough of the praises. On to more interesting:

History factoids: The bit on the Hertzberg clock history generated memories and comments. Patsy Hatch Patterson and Jeanine Kliefoth Price both remember getting off the bus at that corner and checking the time. Patsy walked down Houston Street and up Alamo Plaza to get to Joske’s. Ben Williams that “You may not know that Hertzberg’s is where Ike bought Mamie her engagement ring. He was an instructor for ROTC at TMI in his first assignment after West Point.” Back in the 80’s (1980’s) when I often presided over ribbon cuttings for the Chamber of Commerce, one of the events took place on a newly converted office building on Broadway. It had originally been an apartment building and was the first residence of Ike and Mamie after they were married. 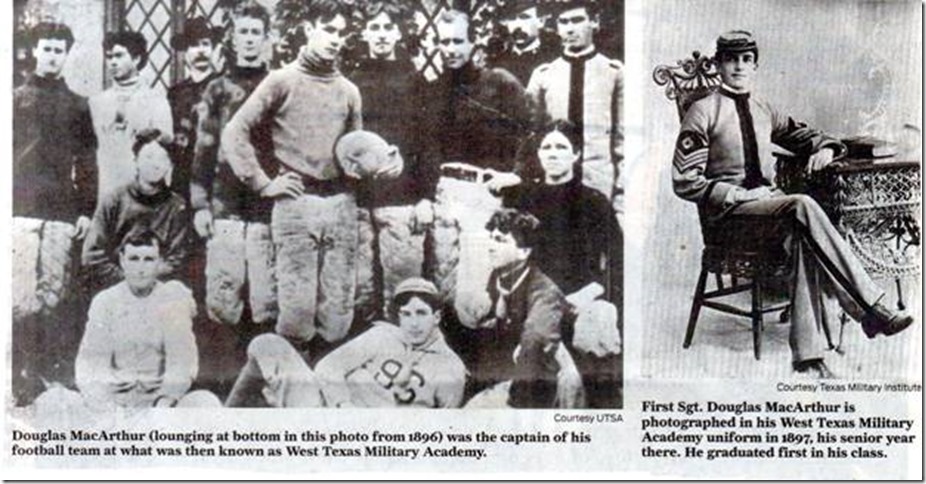 Closing with a few more photos sent by Jim Warren:

If you have old photos to include here, send them along to jeff-54@satx.rr.com