Pay phone Redux:
Who remembers my last blog? I noted the passing of the pay phone from our culture, recalling how we searched them out as kids and the of joy of finding a coin in the slot.

Like Mark Twain’s premature obituary, I bemoaned too soon the passing of the pay phone. Instead, we should just consider them an endangered species. In Glacier Park in August, I came across two pay phones but found no coin in the slot. Actually, I am not certain that coins are accepted as payment any more. Here is proof that they are not gone. 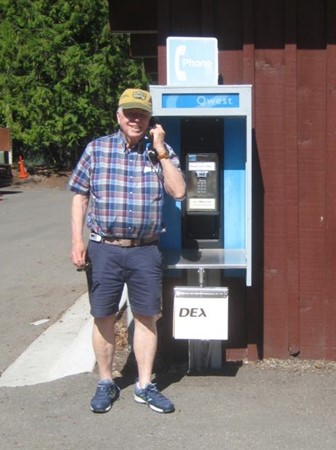 In passing, Glacier is magnificent. This was a trip planned for 2019 but cancelled because forest fires broke out the week before we were to depart. This trip, forest fires in Oregon, Canada, and California covered the area in a significant haze most of our days there, but the day we went to the top was clear, mostly, and the views and scenery memorable.

One very sad difference from the planned trip in 2019 is that Jack and Marsha Davis were going to tour guide us all over the area. Sadly, Jack is no longer with us. We did drive by and salute their home, which supported a for sale sign.

Skipper Quick
Carol Quick sent an update on Skipper and their life in Victoria. Carol writes: .  Skip and I are still kicking but just not very high anymore.  Skip has very bad diabetes and traveling isn’t easy for him.

Take some pictures and send them if you get a chance.  We have moved to a Senior Community.

Hope there is still a good turnout for these luncheons.  Skip and I will celebrate 65th anniversary the end of August—where has all the time gone???

We feel very blessed to have lived long enough to see 8 grandchildren and now 8 great grandchildren.  Anyone wanting to drop a note to Skip—he would love it!

Note: Anyone who wishes to call or write Skipper can email me for the number or address, preferring not to post it on line. I am at jeff-54@satx.rr.co

Another passing. Ann Hundley died a month ago, with her memorial service September 18th. I did not know Ann but was aware of who she was. She married Louis Nelson, who was a year ahead of us, during our senior year. What I recall about Ann happened years later when she was horseback. The horse acted up, was spooked, or stumbled unexpectedly and Ann was thrown. Her neck was broken and she spent months in the hospital and rehab, but recovered. She was one tough lady. Here is her obituary.

Catherine Ann Nelson, 85, of San Antonio, Texas left this earth on August 8, 2021, to be with her beloved husband Louis and her daughters Cathy and Susan. She is survived by her children, Debbie, and Robert (Buzzy) Nelson, along with six grandchildren and eight great-grandchildren whom she adored. Ann is also survived by her brothers, George and John Hundley, and her sister Roberta Hundley Walters, along with numerous nephews and nieces.

Born to Robert and Roberta Hundley, Ann was raised with her brothers, sister and cousins on the Hundley Dairy Farm, which no doubt inspired her life-long love for animals and the outdoors. At the age of 13, she was introduced to her future husband and at 17 began their marriage of nearly 65 years; a feat rarely accomplished but according to Ann, “Marriage is easy when you marry your best friend!”

Ann and Louis never passed up the opportunity to experience a different country and culture; however, their top travel priority was attending as many of their grandchildren’s football and baseball games as possible. Following in her parents’ footsteps, Ann’s summers were spent in Jackson Hole, Wyoming, where she led her family on every horseback ride and never failed to out-catch anyone brave enough to fish alongside of her!

Ann was a mother, aunt, and dear friend to many and will be remembered for her infectious smile, beautiful spirit, and her overwhelming love she had for her family.

In lieu of flowers, donations may be made to Jackson Hole Wildlife Foundation at jhwildlife.org

Class Lunch:
It is Thursday. Hope to see a bunch of you there.