Classmates:
Connie Mays Dyer
and I spoke the other day. Connie has had a tough row over the last couple of years. She lost her husband and son fairly close together. Then three weeks after Byron passed, Connie fell on her driveway. Connie related, “Here I was lying in my driveway at 7:30 PM and my phone was in the house. I live on a very quiet street with little traffic. I could not get up and I was wondering if I would lie there till the next morning, when my housekeeper came. Fortunately, after a short while, my neighbor came out to close his garage door and found me. He got me to the hospital.” Connie had broken a bone she did not know existed—the bone that connects the thigh bone to the hip bone. Connie was in the hospital for five weeks.

Connie says she was fit before the fall and back to normal, except for all the titanium in her hip area. I asked Connie if she were driving again and there is another sad tale. Connie’s license expired while caring for Byron and was non-renewable after two years. So she has started over, studying the rules and taking the written test. She had just arranged a date for the road test when we spoke and admitted being nervous. Knowing Connie, she will excel.

Here is something I bet many of you do not know about Connie. At The University of Texas, Connie was a geology major. There were only a handful of female geology majors at that time. For years, Connie has been on the school of geology advisory council. If that does not impress you enough, Connie has also served for years on the Board of the Methodist Hospital system in Houston. She is now an honorary board member. My own accomplishments seem small in comparison.

Laura Moore Brusenhan
is just now recovering from a badly broken ankle bone, which she told me about last week. Laura was awaiting an elevator at her residence and she fell and blanked out. She thinks there was some reaction to a medication. On awakening, she was told not to move, as her ankle was obviously broken with bone showing. Laura has been recovering at home. Like Connie, she is packed with plates and pins. The prognosis is that she will not be able to walk on the foot until October, which seems a long way away. Laura is in good spirits, though, and upbeat as always whenever we chat.

Lunch Coming Up:
After a two-year hiatus caused by the covid, another class lunch is on the schedule for September 9th. You should know about that already, but you may not have responded about your attendance. Among others, Larry Byrd is coming over from Houston and a strong possibility of Bruce Cassel in for a visit from California. We hope to see the usual crew coming in from Austin, College Station, Georgetown, and other points.

Whimsey:
While maybe not truly whimsical, various flashbacks or triggers on the memory pop into my erstwhile brain from time to time. If I am not driving, I will jot them down and share here. The only problems with this method is that the memory jogs often occur while driving, or, if they do get jotted down, the issue becomes finding those notes when wanting them.

While I do not find the notes at the moment, I will regale you with something that will puzzle any sane person. For years, I have saved memorabilia—stuffed into a box for later perusal and not looked at for decades. By now it is a pretty big box. But as we all start to age of out of things, I have been sorting and mostly tossing stuff that has little value any more. Most recently, I came across a three old calendars. One of them was for our senior year. Maybe a few entries from our Senior Class Week will not bore too much. So here goes:

May 23. Baccalaureate Sunday. Schools cannot do this anymore.

May 31. Class Day, Senior Movie, Dance given by Bobbie Tate. A full day. I will talk about Class Day and the Senior Movie in another blog.

June 1. Senior bar-be-que, followed by a bunch going to Playland Park. I don’t recall the barbecue, but the calendar notes that I took Marilynn Black
as my date. Hope you are not embarrassed, Marilynn.

There were other activities of interest. One was a “Kid Party.” I cannot recall attending that, though it is on my calendar. Along the way, someone gave me a bunch of photos taken at the party, classmates of 1954 and 1955 dressed as kids. I posted these photos a couple of years ago, and since I do not remember the party, I probably was not there. The folder with the photos had Jackie Kindrick written on it. A few years back, I asked Sammie Kindrick for Jackie’s address so I could send her the photos. Sammie said she has no clue where Jackie is, that no one has heard from her for years.

In the calendar for the next year when I was a college freshman, I noted that I was in town for a dance jointly given by Larry Fly and Bruce Parker. I mentioned this to a classmate who remarked, “What are guys doing giving dances?” I don’t have a good answer except maybe they knew about the Me Too and other movements to occur in seventy years.

Here is a bit of
nostalgia
that tickled me. I especially like the captions. 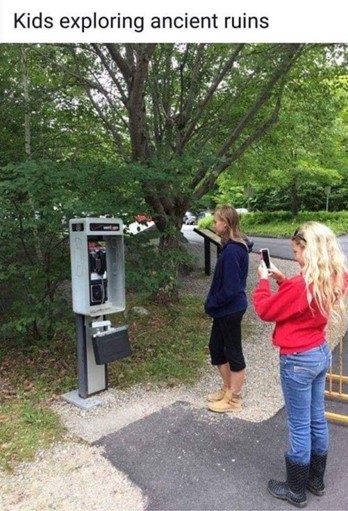 Obituaries:
The most frequent question I hear is “Has anyone died recently.” We probably all read obits now, except they are becoming extinct. With San Antonio’s million and a half population, hundreds die daily. But the daily newspaper may have none to maybe thirty on a Sunday. Part of the reason is cost. This morning a neighbor whose wife just died told me a short obituary with a photo cost $1,000. That is outrageous and probably a major inhibitor for posting the obit. I think changing customs is another reason. Younger generations use social media and don’t find the formal announcement of value.

I hear about classmates passing on by the occasional obit, and word of mouth. In those instances, one can type in a name and obituary into Google or other browser. If there is one a funeral home or newspaper will usually be cited. All funereal homes have a website now, and they almost always have listed or archived obituaries of their clients. Is client the right word for the mortuary? Customers does not sound right, nor does “those recently embalmed or baked.” Send your suggestions.

Closing with a shocking thought:
When we graduated in 1954, we ranged in age from 17-19. High school graduates today were born between 2002 and 2004! I have been retired that long.