Blog 135 Classmate Updates and Other Ramblings

Note: blog subscribers who are not from the TJHS class of ’87, today’s effort is mostly about past and present classmates.

Regarding Facebook:
I have little use for Facebook and spend almost zero time on it, but that is gist for another time. Last Friday, I found something useful. It was Gordon Jamison’s birthday. I had not heard from Gordon for several years, though he used to call Ben Williams
and me somewhat regularly. At that time Gordon was living in a double-wide in Pflugerville. He moved to Bastrop to be close to children, and that is when he dropped out of sight.

Reading the Facebook comments, I discovered that Gordon died in February, 2019. Sadly, I cannot offer more, other than I captured two photos off Facebook and publish them after the Shoutout below. I will also relate what I recall from some of my conversations with him. The other timely Facebook notification urged wishing Joy Robertson
a Happy Birthday. Joy died in 2010, but every year, the reminder email appears.

Shoutout First, though, here is a Texas-sized thanks to those who have sent greetings after the last two class blast emails from February and April. Many of the notes were written in February during the severe winter storm across Texas. I am making the assumption that no one will object to being quoted here and perhaps more tenuous is the assumption that most of you will find the greetings and updates of some interest. They follow in the order they were received. Half the comments today and the other half in a day or so.

Jerry Cline Jerry reported having both vaccine shots and was looking forward to joining family and friends. He sadly recalled the deaths of Bobby Chalman, Richard Kaufman, and Jerry Harris. Jerry is still in California, while brother Barney lives in Blanco.

Jerry Stephens Jerry quickly volunteered to set up a virtual meeting for all who wish to participate. He is still working on it, but I think it is like herding a bunch of cats to get all the pieces to fit. Thanks for keeping at it, Jerry.

Bill Carls Bill wrote “Jo and I are still well and kicking. The only problem is that when I do some work I take longer breaks. I would be happy to join in on a virtual reunion.

I don’t know if I ever told you before but I graduated from the University of Michigan with an Electrical Engineering degree in 1964. After Jeff I went into the Navy for 4 years with one year in school for fire control radar and then traveled the Pacific for almost 3 years. After that I worked for RCA aboard a converted liberty ship with the last 6 months traveling the Caribbean. After graduation I went to work for the Jet Propulsion Lab, a NASA facility, until I retired at the age of 62. It doesn’t seem like I’ve been retired for 23 years. I guess time flies when you’re having fun.” Bill has driven down from Leander for the last Jeff lunch in October 2019.

Sue Elo Settles From Sue:” I’m missing the lunches as I’m sure most of those who were able to participate are also missing but understand the reason. I would be interested in a virtual get together, but don’t know how it works.

We have had a whirlwind of happenings since moving back to TX, my husband Jim passed away last year and our whole family had the COVID-19 in Nov but thankfully all survived. We are moving along into 2021 and as you know we are experiencing a unheard of winter storm as I write this note, just thankful it is not sleet and snow which would be even worse.

Genevieve Brooks “Reggie and I are still here and rolling with the times.  As of last November we now have 11 Great Grands. It’s like we have to rent a hall to have a family get to gather.  It would be great to have a class get to gather again.”


Nancy Driesslein Pierce Enjoyed the info on improvements around Jeff since I  grew up only 3 blocks away on Furr Drive but haven’t been there in a while.  Loved the fish in the pond on Thespian Island as a kid.  (Kids could bike and walk around by themselves then.)  Thanks for the memory.

Marcia Dickinson Hudson Hi all. Still alive and kicking(sometimes). Got my first covid shot last week. Hope you are all well.

Delbert Phillips Thanks for the update.  I live in Houston and was a good friend of Jerry (Harris). We’ve been without power off and on since Monday, usually 14 hours off and 3 hours on at a time..  Jerry Harris and I worked together  in the past and were good friends but didn’t know he passed.

Robert Huff Thanks for keeping us informed. I wish to stay on your distribution list.

Kathy Lentz Miller
DICK TURNED 90 FEB 23 AND I WAS 86 NOV 26 WE ARE DOING ALRIGHT. I HAVE  DOXY WHICH DR TAlKs TO YOU BY PHONE. I DO NOT HAVE VIRTUAL. WE WERE MARRIED 64 YEARS This PAST JANUARY. ALWAYS GLAD TO HEAR FROM YOU. I THINK THIS IS A GREAT IDEA. KATHY LENTZ MILLER

Bruce Cassell Thanks for Jerry Stephens’ efforts putting this (virtual meeting) together. At this stage of my life, I have a lot of flexibility in my schedule.

Living way out West, I don’t have contact with our classmates (other than Rich Kaufman who recently passed away).

Jeanine Price
I am still here.

Fritzi Connelly
Good to hear from you, good health to everyone.

Frank Hagan
I am still here. 👍👍

Priscilla Tate
I’m still here! And getting ready to fly to my beloved Maine on June 5.  I’ll stay until mid-October and come back when the heat is mostly down to the 80s.

I’m so lucky to be in good health; I’ve had one knee and one hip replaced and walk at least a mile every day.

Gordon Bartley Still here and kicking but not very hard 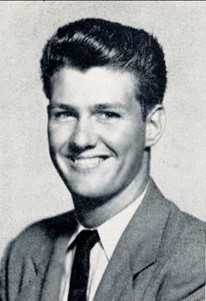 I did not know Gordon well at Jeff, but here is my recall of conversations since then.

In later years Gordon adopted “Buffalo” as his middle name, not officially, but when he added his name to something, it was always “Gordon Buffalo Jamison.”

When putting together the class book of memories after our sixtieth reunion, I asked Gordon about sending his input. He began telling me about his life and I jotted down as much as I could as he rambled.

Succinctly, Gordon graduated from UT in 1959, sold insurance for a number of years, married, divorced, and married a Jeff grad a few years behind us (sorry, I don’t have her name.)

Gordon was in two serious auto accidents with long rehab periods. Afterward, he taught school for a couple of years, moved his family to California, back to Texas in 1970, and returned to selling insurance. After being widowed and retiring, Gordon moved to Guatemala for nine years and later to Honduras for a year or two. Too much rain brought him back to Austin, and hence to Bastrop. RIP Gordon.

“I shall return.”
Douglas Macarthur

2 thoughts on “Blog 135 Classmate Updates and Other Ramblings”