Three topics are up today: Renovation at Jefferson, how Ed Schleyer caused the annual drag show at Jeff to be banned, and a bit about Englebert Humperdinck. Read on.

Island in the Sun…No, not a song sung by Engelbart Humperdinck, the British pop singer from the mid-fifties until today. (Will get to Englebert at blog’s end.) This is the small island across the street from where the walk starts to the main doors at Jeff. From my rusty memory, that is where the buses all waited at the end of the school day to transport our classmates home. Across the street is a church. I believe the denomination then was Church of Christ, but today it is named The Living Church at Woodlawn Pointe.

Back to the island, which is known as Thespian Island. My recall is that it is roughly triangular in shape and back then had a walk around its perimeter and then a waist high hedge adjacent to and inside the walk. If anyone else recalls, please confirm or set me straight.

Lon Carpenter recently sent a photo that shows major renovation of the island: 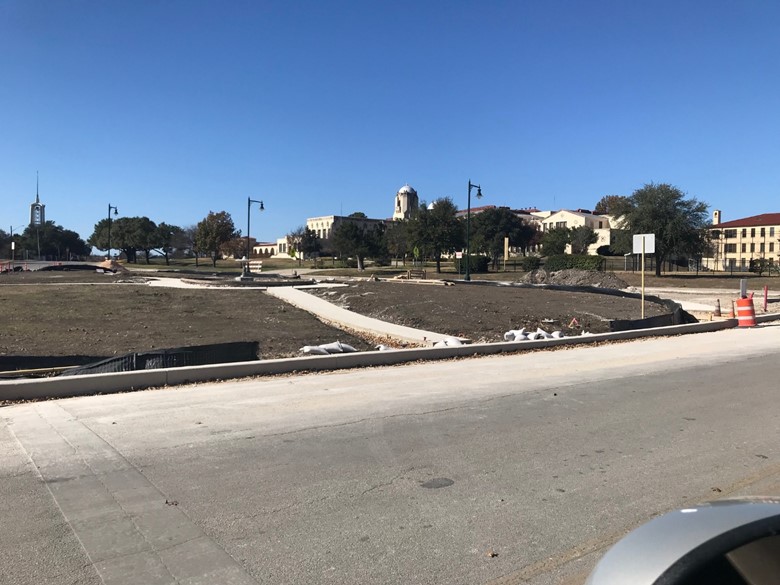 The city is currently renovating it and upgrading Wilson Avenue on the west side of the school. Today, the school drama department stakes some claim to it. This the site to their Facebook page: https://www.facebook.com/TJHSTheatreDepartment/posts/952730058257628

I have asked the city for more information and am waiting for a response, if any, and also Ed Garza, a Jeff alum and ex-city mayor. Ed is on the school board and instrumental in protecting Jeff. He spoke at one of our lunches a couple of years ago. Will add more in a future blog if/as info becomes available.

I also contacted a former Jeff student, David Segura, who is writing a book on the history of Jefferson. Here is what he had to say about Thespian Island:

I have a chapter on the complete history of Thespian Island. Too massive for this email; however…

IMO, the Island’s beauty has been destroyed with this latest project. The beautiful stone sidewalks (3) were replaced with massive concrete walls. My heart sank when I saw the jaw-dropping bulldozers on our sacred island.

During some years (a whole decade), the island was overrun by grass, weeds, overgrown bushes, etc.

Much more in my book

In researching, I found the following information from 2012, when the renovations at our school were discussed.

Adopt a new Master Plan to guide the design, prioritization, phasing, and budgeting of site-related improvements to the campus. Proposed work includes the following:

13. Reconfiguration of main vehicular entrance from Wilson Boulevard to im

This plan was approved and has been in progress since 2012

Famous minutes of infamy…
Here is a photo of Ed Schleyer (right), his wife, Vicki, and Johnny Coyle taken at one of our past reunions.

Seeing Ed recalls a long hidden memory from our school days. One of the boy’s clubs was the Senate. Every spring the Senate put on a drag show—imagine that in the 1950’s! In the spring of ’56, Ed and I and others were in a ballet chorus—Madame (someone’s) Blue Butterflies. Fittingly, we wore baggy blue pants, blue tops, and had some sort of netting attached at wrists and somewhere on the costume.

Ed’s dance caused the show to be banned from the Jeff stage forever. Here is what happened. Just before our “performance,” which was some rather un-coordinated leaping around the stage to a Strauss waltz, Ed excused himself to the restroom and came back ready to go on stage with his costume “enhanced.” Ed had taken a large handfuls of paper towels and molded them into small mountains, which he stuffed down the front of his blue top, putting Dolly Parten to shame.

Midway through the ballet, half of Ed’s enhancement went south toward his stomach. To remedy that, Ed calmly stopped his performance and reached into his top and re-positioned his sagging mammary, then proceeded with his dance steps. Those actions brought the house down.

The Dean of Girls, Frances Smith, was scandalized!!! She immediately went face-to-face with T. Guy Rogers, demanding that all future shows be cancelled. T. Guy acquiesced, and that was the end of the Senate drag show. What a great way to end!

I don’t know much about Dean Smith, other than she was short enough to be gnome-like and had a Dutch boy haircut. And she was a maiden lady, like so many teachers back then.

Now about Englebert Humperdinck
Englebert was English,
not to be confused with the German composer, born Arnold George Dorsey in India. He recorded some songs in the fifties but made his name (after converting to Englebert), with his breakthrough coming with “Release Me” in 1967 followed by “The Last Waltz”. Many more hits followed. Old Eng is still singing today with scheduled performances in Europe in 2021 and a recording in 2020. By the way: Eng is 84 like us. If you want to see all the songs he recorded, go to Google or other browser and search on Englebert Humperdinck songs. You will recognize most of them.

Confession time…Having researched and written the above about old Englebert, I looked for Island in the Sun
and find it was sung by Harry Belafonte. Remember him? More famous for his rendition of the Banana Boat song.

Englebert sang A Place in the Sun
and There’s An Island
instead. Nancy Driesslein Pearce
will tell you that our 1954 Monticello had a sunburst on the cover and the title page read “A Place in the Sun”. Nancy, do you have any recall how that became the title?

IF you are confused by this, so am I. And if you care to listen to the three songs, here is where:

A Place in the Sun— Englebert Humperdinck https://www.youtube.com/watch?v=8DJgCl2sI0k

Till the next time…