As the Russian peasants working in the fields stopped to say, “Here’s to a glorious year.” Let’s hope for a good year with good health, although for some it will not be.

Lon Carpenter called to tell me that Harvey Clouser passed away on December 19th. Harvey had been ill for a very long time, even predating our sixtieth reunion in 2014. At that time, Harvey’s wife, Judith, said she would ask Harvey, but she doubted that they would attend. Then she called to let me know that Harvey definitely wanted to attend, and they did.

No obituary has been published, but a brief listing for Harvey is on line at

https://www.dignitymemorial.com/obituaries/glendora-ca/harvey-clouser-8093870 should any of you care to add a memory of Harvey.

The Student Council Fountain is rededicated

The renovation of the fountain in the Student Council patio has been completed. The fountain is a gift from the Class of 1932, the first graduating class. The renovation project was undertaken by the TJHS Historic Preservation Society. The effort covered several years from the glimmer of an idea to fruition. Many from our class participated in this project by buying one or more bricks with a brief inscription on them. Probably 99% included our name and class year, while a few commemorated other classmates, teachers, or good wishes.

Incidentally, more bricks were emplaced in December. When the weather is pleasant, I will take a trip over and photo recently laid bricks and send them along to donors. And should you finally to stop procrastinating and order a brick, you can do so. Don’t remember the details? Email me.

On a bleak Saturday morning on November 10th, a rededication ceremony celebrated completion. Our class reps were Dorothy McGraw, Betty Russell, Johnny Coyle, and me. Nobody elected us—we just heard about it and showed up. After a ribbon-cutting, the fountain switch was turned on and water flowed. This renovation restores the fountain exactly as it was, with some new tiles that color match. One surprise to us is that the original fountain had three frogs perched on the interior fountain spewing water. The frogs were long gone by 1951, when we started out.

There is a dearth of photos because someone forgot the camera and the phone. Tas (Dorothy) took a couple that she forwarded to me, and one other was not flattering to either party, so below are the two usable photos. The top photo shows the frogs.

Also new is a low curb to keep people from tripping into the fountain. Back in the day, without the curb one of the rites for initiation into the Senate Club was to stand at the edge and lean over to the inner rim and do pushups. That was not a problem. The issue was to get back from that position to erect without falling in the fountain.

And here is the program for the day. 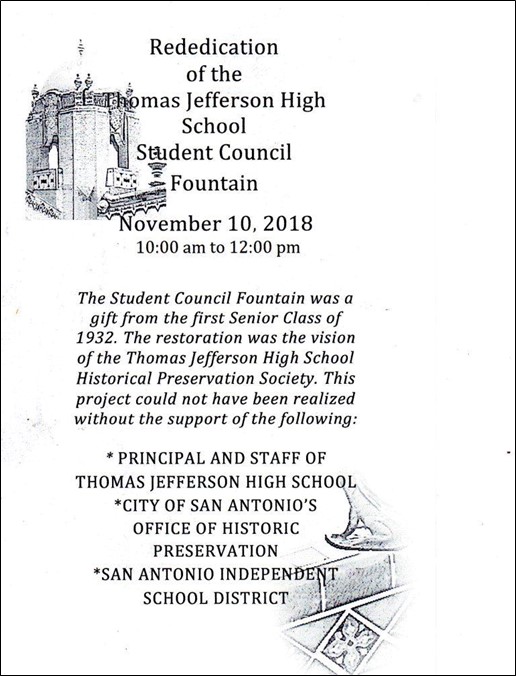