The original intent of these postings was to hype our 60th reunion two years ago this month. I was not sure about starting these blogs again after a year or so since last effort, but now and again someone asks or encourages to continue. So I will give it another shot, aiming for one or two efforts a week—for now.

Two recent queries
from the postings might interest you—or not. Eight or so months ago, a message arrived from the organizer of the Miss San Antonio pageant, asking about one of our classmates who was crowned Miss San Antonio of 1954 and later competed in the Miss Texas pageant. He was updating pageant archives and sent a cover story from the front page of the newspaper. The print is illegible, but if I can find a way to translate it, I will post it later on. Did you all know that our own Sarah Belcia
was crowned Miss San Antonio soon after we graduated? I did not. A year after that, Sarah was selected as Miss Wool, which I think she found far more rewarding. If I find the time and Sarah is willing, I will get more information about her two reigns.

The other contact was recently from the sister of Virginia Joyce. Virginia is alive and well and living in Lufkin. She is not adept at the computer, so you will not be hearing from her, but know that she is well.

Jeff Lunch:
The lunch at La Fonda on April 7 was top notch. We met on the back patio in the middle of a perfect April Day. Just under 70 attended and had a great time judging from the many positive comments. I will post photos on here that Patsy Patterson
sent along. Patsy has been great about sending photos from just every event over the past thirty years.

We concluded the lunch with a guest speaker, Dr. John Frederick, who is the Provost and VP for Academic Affairs at UTSA (The University of Texas at San Antonio). He entertained us with a lot of information about Jeff that I certainly did not know. I will post his comments in the next blog.

Classmate deaths:
Here is sad news about the loss of two classmates: Byron LeFlore
passed away on March 8, 2016 and Guy Bragg
died on May 2, 2016. I will download the obituaries and post them in the near future. Thanks to Jeanine Kliefoth Price and Patricia Bryant
for alerting me about Guy. If anyone wants to post a comment in either guest book on the funeral home website, please advise me.

Photos from the lunch: 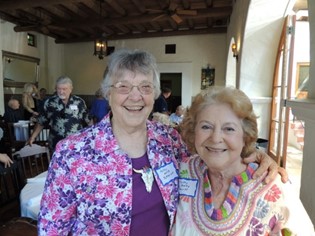 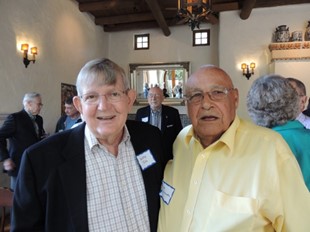 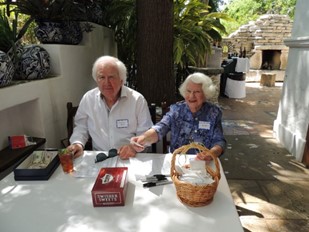 Back in the Saddle: Shades of Gene Autry. Gene did not compare to Roy Rogers in my book, but he was definitely ahead of Hopalong Cassidy and Lash LaRue. Of course, I will never forgive him for composing and singing Rudolph the Red-Nosed Reindeer. That and Frosty the Snowman are on my all-time most-hated Christmas season songs. If you want to hear Gene Autry (and maybe sing along?), click on the site below.


So, stay tuned for more to come.

7 thoughts on “BACK IN THE SADDLE AGAIN”