Opened in 1926 for the Publix-Paramount chain, this large downtown theater was designed by the Boller Brothers firm, and was done in Spanish Colonial and Rococco style. Its fantastic terra-cotta facade, complete with columns and multicolored arches decorated with gilded medallions, in addition to its huge vertical marquee, were as spectacular as the interior, which was one of the city’s finest movie houses of the 20s, along with the Empire, Aztec and, later, Majestic Theatres.

Hailed by Publix as ‘San Antonio’s Two-Million Dollar Showplace’ when it opened, it was the site of the premiere of Paramount’s “Wings” less than a year later, which was filmed near San Antonio. Stars Buddy Rogers and Clara Bow were both in attendance.

However, after many years as a successful first-run house, even thriving during the Depression era, the Texas began to decline, and closed in the 70s. Unfortunately, just as interest in saving many of the area’s historic buildings was starting to pick up, the Texas was razed, in 1983, but its facade was salvaged, and incorpated into the modern office building built on the site. When Southwestern Bell took over the building, it meticulously restored the Texas’ terra-cotta facade to its 20s appearance.

Below is the interior. Wish it were in color.  And look at this great view of Houston Street.  All the old signs are gone. 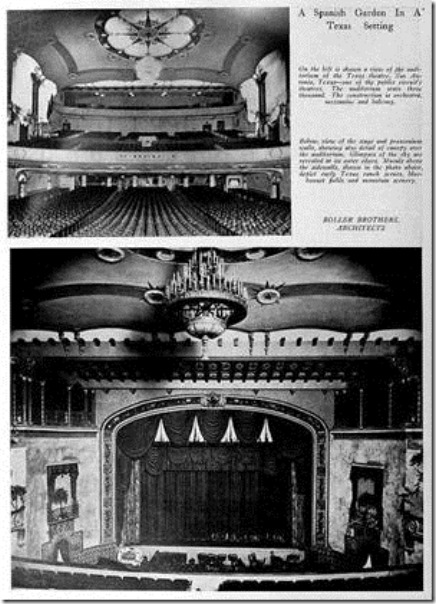 This is how it looks today: 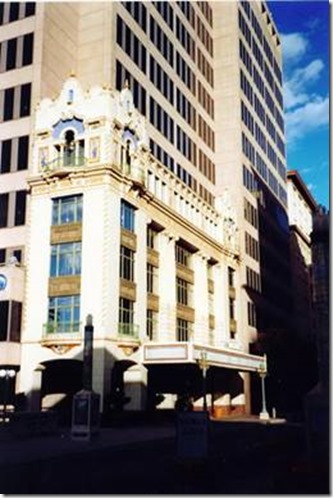 Does anyone recall: When we had to figure out our schedule at the start of each semester, the strategy I recall was to arrange a third period class in or near the cafeteria wing. I generally opted for Spanish, just down the outdoor arcade by Mrs. Hicks’ rose garden. Or you could do history upstairs or math or typing or whatever was near the first floor main entrance. Back then, we had the precursor of today’s fast food stores. There was a small kiosk on both the boys and the girls side, where you could get hamburgers, and maybe hot dogs. Does anyone remember what else they sold there? I do recall the burgers were pretty bad, but fast. The early McDonalds. People like Jim McNeel and Ben Williams worked in the booth. I don’t remember who else. The good old days. I will bet that the boys and girls are not segregated now. I wonder why it was done back then? Anyone have a clue?

The lockers: When I visited Jeff last March for an open house, all of the lockers still line the hallways, but most appeared to be empty. The combination locks are gone and a few had padlocks. I recall with the combination locks, you could stuff a small piece of paper in the mechanism so that the locker would not lock. Some of us managed to get a paper stuffed into the lock of one of our classmates (nameless, of course), so that we had access to it. He was not aware and dutifully unlocked it every time he needed something. We used to leave notes, re-arrange things in the locker, and generally make him wonder what was going on. Don’t know if he ever caught on or not.

I hope today’s comments have triggered some of your own memories that you will share. Thanks to all who have made a comment.