Today is the traditional day for Memorial Day. Do you remember that May 31 was always the last day of school? We went for a short while, just long enough to get report cards. Then we were free for the summer—at least until we were old enough to get jobs. In the younger days, grade-school wise, summers seemed endless, until it was a week till school started. Then it was rushing around to do some summer project to take back to school in the fall.

Bur that was before high school. Summer jobs varied. Between junior and senior years, I had a job with CPS. A crew of a dozen of us were hired to clear land at what is now the CPS park on Perrin-Beitel Road near the main post office. On that crew with me from Jeff were Jim Bob Millar and Bob Jolly. We were all kids of CPS employees, so we had a job. But it was hot, hard work—you could not walk three steps without coming across prickly pear cactus and tons of small trees. We worked all summer clearing and made a dent.

Photo moment! Here is a photo someone gave me in May of our freshman year. Told me they found it in a trash can in the Declaration or Monticello office and thought I might want it. It went into a box of photos that I sorted not long ago and put aside. 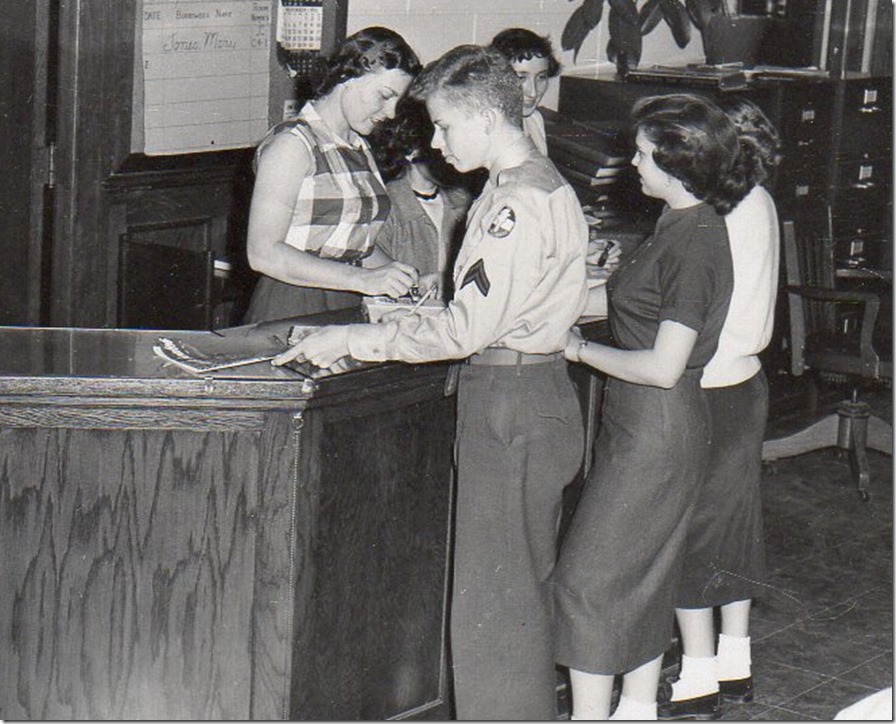 I don’t recognize those behind the counter, but the “customers” are Genevieve San Marco Brooks and me. Notice the long skirts on the girls.

More pics. Did you read Carolyn Taylor’s comments about the pictures from the kid party? Carolyn lets us know what is going on. Here are a couple more for you.

Here we have Jack Taylor (class of ’55), Dorothy Crawford, Does anyone know who this is?, followed by Henry Coy, I think. Note the Fox Company border around the photo?

Reunion follow up: I am at work (very slowly) at getting the class history. I am still hoping to get some input on life since 1954. We have about 70 replies so far. With 280 on our active roster, that leaves close to 200 who need to reply. Also, there will be photos to label and put into some sort of viewable format. Probably the first item to look for is a class directory. Many thanks are going to Lavonne Kennedy, who is scanning in the photos from the yearbook to add to the class history, so we can see then and now.

Mr. McDaniel: It has intrigued me that there are so many comments about Mr. Mc. He generated strong passions in his student, that is for certain. I am a bit surprised that there have not been more memories about other teachers. I heard various comments about teachers at the reunion.

Looking ahead: it would be nice to learn more about some of our out-of-touch classmates. Is anyone in contact with Cres McFall, who lives in California? What about Roy McBride in Florida, Don McCorkle in La Grange, or Ney and Joan Rieber, in Carolina? Kay Haller sent a note before the reunion. I will dig it out and print it soon.