There have been some great comments and responses on this blog. Thanks for your input.

Check your mailbox!  Like the proverbial check that is in the mail, the invitation and information packet is at the post office. Watch for it in your mailbox this week. Major task done! This task was not all work by a long shot. Laura Moore Brusenhan came by to help and bring us up to date. She founded Brusenhan’s Sunshine Travel Company thirty-five years now, and is still managing it.

Remembering Mrs. Talliaferro:  Do you remember Mrs. T?  She was tall, skinny, and had very dark hair.  She taught American history.  A few years after we left Jefferson, after both T. Guy and Dean Gott had reitred, the new principal found that the Mrs. Talliaferro, Petrich, and one or two others trying to run him and the school.  Over the summer, he arranged to have them transferred to other schools.  Mrs. T. went to Edison.

Fast-forward till around 1990.  I was in Dennis Jewelry one day picking up a repaired watch when I heard this booming voice from the opposite end of the counter, “That’s Talliaferro, spelled T-a-l-l-i-a-f-e-r-r-o”  I looked up to see this white-haired amply-built woman (does rotund bring up an image?).   I could not imagine, but I went down and asked if she was indeed the former Jeff teacher, and indeed she was.  She went on to tell me that she and a few other teachers had been requested to go to other schools in deep trouble and get them straightened out.  Mrs. Talliaferro died seven or eight years ago at age 102.  From the time frames, I figured she was around 50back in the day.

Back in the Day: Does anyone remember some of the afterschool activities and organizations we participated in after school? We had a variety of social clubs—Senate, Hayne, MJR, and Shakespeare to name a few, plus some more intellectual clubs, such as the French, Spanish, and Latin clubs, and Information Please (whatever that was.) And there were the Hi-Y and Tri Hi-Y clubs that had lofty aims, and many more. Three was a something-for-every-one type activity.

Outside groups included the DeMolay as the precursor to Masons, the Rainbow Girls, the Children of Texas Pioneers (I don’t think that is the correct name) with monthly dances at Pioneer Hall. Qualification there was to have had family in Texas by 1880, I believe. Peggy Page Murry’s parents sponsored and chaperoned those dances.

How many of you know that until a year or so before we arrived there, Jeff had fraternities and sororities? I don’t know a whole lot of history about them, but I remember a neighbor’s daughter who described the initiations. Anyone out there have any further knowledge?

Update on the city: Those of you who have been away for many years may want to take the time to drive through the King William district, immediately south of downtown. King William was a settlement by the early Germans, with fine old homes built in the late 1800’s and early 1900’s. The area went into general decay until the 1960’s when gentrification took place. Today, most of the fine old homes have been restored now, and it is a pleasure to drive or walk through. Easiest way from our hotel would be to take one of the trolleys that stop at the hotel. Look for information in the hospitality room.

And the grand hotels: All of the grand old hotels are still here, some not so grand as they once were but still in business. The Gunter (Sheraton) has recently finished a renovation and the St. Anthony is in the midst of one.  Did you know that the St. Anthony had the first electric-eye door west of the Mississippi?  Or so the lore goes.  Below is a pic of the St Anthony today. 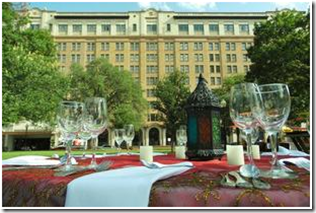 Across the street from the St. Anthony is Travis Park, not a totally reputable place over the years. It is also undergoing a major renovation at this time. The intent is to restore a bright and untarnished image.

Your photo gets mine: We are urging all to send in a recent photo and somewhat brief life history since Jefferson—what did you do after graduation and in the succeeding years? Can you sum up your life in a dozen or so lines? If we get enough of these in hand, after the reunion we will publish a directory and include all the histories and photos we receive.