Another sad blog here, with reprinting the obituary of Tommy Turner. Tom and I were members of the Doolittle advisory at Jefferson, so we go back to 1951. Both of us were mid-termers, but Tom was a year ahead, so I did not know him at Mark Twain, but we ended up graduating from Jeff at the same time. Tom and I re-acquainted in 2002 and hace been in touch several times each year since then. Tom was gentle, caring, and capable. One of the good guys…never to be forgotten. 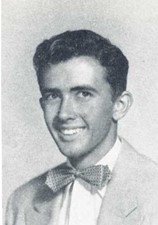 As a young boy, Tom, Jr. moved with his family to San Antonio where his father had sought and found employment in the midst of the Great Depression. By his teen years, Tom, Jr. was working alongside his father who, by that time, had successfully established his own company, Sigmor Shamrock Corporation. Together with his parents and younger brother, Fred, Tom worked to build the company into a national leader in the convenience store industry. By the time it was sold to Diamond Shamrock in 1983, the company consisted of 577 stores in 20 states.

Within 10 years of that sale, Turner and family re-entered the convenience store arena in the form of a partnership with Mobil Oil. The venture was branded TETCO Stores, a name that carried the initials of both father and son as well as the name of their company. In just over a decade, Tom Turner, Jr. oversaw the growth of TETCO Stores to the point that it, too, was sought out and purchased by a globally-recognized brand, 7-Eleven.

Until his passing, Turner remained active in the family business and served as Chairman of TETCO, Inc. which remains a privately-held company now including members of the family’s fourth generation among its ranks. During his early years working in the family business, Tom also attended and graduated from Jefferson High School and Trinity University.

On June 8, 1956, he married the love of his life, Billie Lee. Together they had four sons, T.J., Chris, Gary and Jon. In 1979, second-born son, Chris, was tragically killed in an accident his senior year of high school. Tom, as well as his family, never got over the loss. His family finds great comfort knowing that the two are now reunited in Heaven.

Tom will be most remembered for his deep love, loyalty and devotion to Billie, his wife of 62 years. During their marriage, Tom seldom spent time away from Billie Lee. When he had to travel for business, he did his best to take her with him. He was a dedicated father to his sons, encouraging them to play all sports, and loved attending their games. As a believer in the right and ability to defend oneself, Tom personally taught each of his boys the sport of boxing. His sons have said their father was a perfect role model, inspiring them to become the husbands and fathers they are today.

Family always came first no matter what. Tom’s most memorable times were the family’s annual trips to Pebble Beach and Walt Disney World for over 45 years. Everyone who knew Tom knew that golf, guns and classic cars were his passions. It was not unusual for his neighbors and employees to see him drive a different car each day of the week.

As a young man, Tom fell in love with the game of golf. A natural athlete, he was a scratch golfer and played every week for 50+ years. It was his passion for golf that led the family to establish and develop Sonterra Country Club in 1986.

Tom was a member of Sonterra Country Club, Oak Hills Country Club, The Petroleum Club and The Rotary Club of San Antonio. He was also a proud supporter of the San Antonio Livestock Show and Rodeo’s Scholarship Program, the San Antonio Police Department’s Blue Santa Program, Returning Heroes Home, Wounded Warriors and Shriner’s Hospital for Children. He served on numerous boards including The Society of Independent Gasoline Marketers of America (SIGMA), the founding Board of Governors for The Club at Sonterra, the International Foundation for Junior Golf (IFJG), Southern Texas PGA, the University of Texas Health Science Center, Santa Rosa Children’s Hospital and numerous banking institutions.

The family would like to extend their gratitude to Dr. Christopher Bogaev and Dr. Lisa Fichtel for their care and compassion throughout Tom’s battle with cancer. A special thank you is extended to caregivers Chris Cruz, Jose Serafin, Luis Campos and Ernesto Regalado for their tireless hours and loving care given to Tom in his final months.

A celebration of life will be held Thursday, January 31st from 3:00-6:00p.m. at The Club at Sonterra with a special time of remembrance to begin at 4:30p.m. The family held a private service and burial.

Sometimes we do foolish things, and I plead guilty. Last September, we and another couple decided to go see the Northern Lights in Iceland. The best chances fall in the months of September till April. One of the darkest times falls between February 1st and 8th, so that is when we booked a flight. Now that the time has come to depart, day after tomorrow, I question the sanity of it all. Right now the temperature shows a high of 180 when we arrive on February 1st. How dumb are we? In recent weeks, we have met a bunch of people who either have been or want to go. Those back say it is an incredible country. With short daylight hours, we will see as much as possible and perhaps report on some it on our return.

Till next time, then…