“The time has come,” the Walrus said,

“To talk of many things:

And why the sea is boiling hot–

And whether pigs have wings.”

From “The Walrus and the Carpenter”

David Newhouse has been on our lost list for many, many years, with only the vague knowledge that he used to live somewhere in California. The last contact is thought to be when Lon Carpenter visited with him in the 1970’s. Now David is found. Recently, I came across a new search data base that is free and is good. I searched in California for someone between 75 and 85 for David Newhouse. While I did not find contact information, I did find a listing of relatives, whom I called, reaching his daughter.

I chatted with David and enjoyed a good visit. Here is a quick update. David joined the Navy after high school and six years later settled in California. He married and went to work in the movie industry, working in movie set landscaping until he retired. These days, his daily chores include taking grandkids to school and picking up and packing their lunches. Somehow I have misplaced my notes, so I will tell you more if/when I find them.  So David, who was lost, is found, and my notes are lost until found.

It’s Never Too Late…to enter the 21st century, as Lon Carpenter will tell you. For some time I have been ragging on Lon to get a computer tablet to be able to search the Internet and to send and receive emails. Each time Lon explained that he had a new smart phone that had never come out of the box.   Lon recently acknowledged that he needs to get connected. If you want to contact Lon, his new email address is loncarpenter1936@icloud.com.

Thanks to all who attended the Class of 54 lunch on October 12th. We had about sixty present, several for the first time. All comments I heard were positive and murmurs of anticipation of the next one in April 2018. As ever, our unofficial photographer, Patsy Patterson, was there with trusty camera aimed at those attending.

I will add a photo or two over the next several blogs. 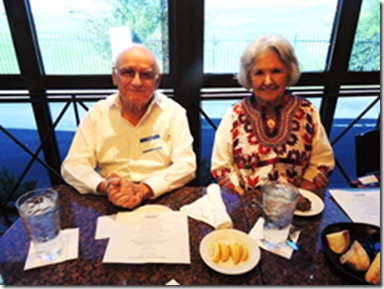